And the Winner Is… (Cover Image Decision)

Posted on September 21, 2019 by Shannon Winslow

Progress! My Cover Image Quandry – parts one and two – is finally resolved!

Usually I like to hold back the cover design of a new book until the day of the official cover reveal. But since you all have been so involved this time around, so instrumental in helping me choose the image to use for the cover, I thought you deserved the chance to follow the creative process, with all its twists and turns (and there have been many this time!), through the next steps as well – sort of an inside view of what goes on behind the scenes to bring a project like this to fruition.

So if you want to be completely surprised with the cover for my upcoming Jane Austen Devotional, proceed no farther today! Otherwise, explore on!

Elizabeth longed to explore its windings; but when they had crossed the bridge, and perceived their distance from the house, Mrs. Gardiner, who was not a great walker, could go no farther, and thought only of returning to the carriage as quickly as possible. Her niece was therefore, obliged to submit… (Pride and Prejudice, chapter 43)

I carefully tallied your votes on my previous post. And although it was far from unanimous, a strong favorite emerged to decide the matter at last. Flowers and sunsets were out, and the Chawton views were in. The picture of the Chawton Garden Gate came in a respectable third place. The Window View beat it out for second. But the clear winner was (drumroll, please) the photo of Chawton Church! Yay!

I liked them all, and so in some ways I didn’t care which one won. I was just happy to finally have a decision made!

Next step: I sent the winning image, along with a general idea of what I envisioned for it, to the graphic artist who creates my covers, so that he could get right to work on it. Phew! That part’s done at last! Now I could just sit back and wait to see what gorgeous design he came up with… or so I thought.

A new problem arose immediately. Turns out the photo’s quality wasn’t good enough to use.

No! Not after you all had chosen it and I finally had a decision I could get excited about! I had committed to this image and I didn’t want to give it up. So I tried, without any luck, to find another photo I liked as well – something very similar. It looked like I was going back to the drawing board once again. *sigh*

But wait a minute. ‘Back to the drawing board.’ Yes, that was it! Instead of throwing out your favorite image completely, I decided to try salvaging the idea by doing a pastel painting from it for the cover image. Here is the result! 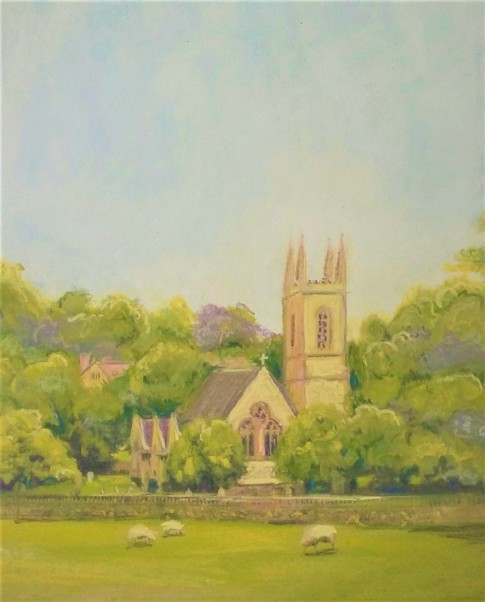 So this is what my graphic designer is working with now. I hope you approve.

As you may remember, I had wanted to use a photograph for this cover, partly so that it would stand out as something very different than my others (since this is a very different kind of book). But I’ve come full circle, back to an ‘artist’s interpretation’ after all. At least it allowed me to add a couple more sheep!

Coming next will be the finished cover reveal with an eye to a proposed publication date of November 1st. Stay tuned!

20 Responses to And the Winner Is… (Cover Image Decision)