Amazon reviewers say — “Thoughtful, inspiring, and beautiful in every way!” “Beautifully written, I highly recommend this devotional book, both for serious Jane Austen fans and for others.”

Jane Austen didn’t only write novels. She also wrote prayers, poems, and entertaining letters, many of which have survived to this day. Curious about her spiritual side, I took a closer look at her three preserved prayers, and there I found a wealth of inspiration for this project.

No one knows how many eloquent prayers the authoress may have composed in her lifetime. We have only thee rather lengthy examples remaining to us. But each line of each one is a mini prayer in itself, I realized, worthy of pausing for further reflection.

So that’s what I’ve done for this devotional. I have broken down Jane Austen’s prayers into fifty individual petitions, allowing each one to inspire a separate message. Every segment is founded on scripture, uses characters and situations from Austen’s novels as illustrations, and is followed up by prayer and praise.

Which if Austen’s characters developed a god complex? Who was really pulling Henry Crawford’s strings? Where do we see examples of true repentance, a redeemer at work, light overcoming darkness?

Jane Austen drew her characters so convincingly – seeming like real people with real thoughts and problems – that their stories constitute a rich source for learning more about life, truth, and hope, as well as spiritual principles. So whether you are a person of faith or not, I hope you will be blessed by this devotional.

Below is a sample message from Prayer & Praise: a Jane Austen Devotional, slightly abbreviated. This book is available in paperback, audio, Kindle, and KU.

An Ounce of Wisdom…

Father of Heaven! whose goodness has brought us in safety to the close of this day, dispose our hearts in fervent prayer.

Making it safely through any particular day is not something we can ever take for granted. Although experience has taught us that we usually do, accidents can happen, sudden illness may occur (even to a person who seemed perfectly healthy a moment before), and random violence is always at least a remote possibility.

When I wrote the lines above, little did I realize that I would an hour later be living out the truth of them as my husband was taken to the hospital with what turned out to be a mild heart attack. Thankfully, he’s going to be okay, but it came as quite a shock, especially since he was exactly what I had just described: a person who seemed perfectly healthy a moment before!

In much the same way, when a group of friends decided to take one last walk on the Cobb at Lyme, they had no suspicion that one of them would barely make it back alive.  And when a lovely young woman set out one day for a rather wet ramble over the grounds of the Cleveland estate, she had no idea it would result in a violent fever that would pursue her to the brink of death.

A brush with disaster may indeed dispose our hearts in fervent prayer, as in today’s petition. We pray that God will rescue us from things beyond our control (then hopefully remember to pray just as fervently in thanksgiving if he does!). It also has the power to change us, temporarily or even permanently. We tend to see things more clearly afterward, to reexamine our behavior and our priorities in light of the discovery that life itself is fragile. We may be moved to repent if our own folly contributed to the crisis, just as Marianne Dashwood does.

“My illness has made me think… I saw in my own behaviour… nothing but a series of imprudence towards myself, and want of kindness to others. I saw that my own feelings had prepared my sufferings, and that my want of fortitude under them had almost led me to the grave. My illness, I well knew, had been entirely brought on by myself, by such negligence of my own health, as I had felt even at the time to be wrong… I wonder at my recovery, wonder that the very eagerness of my desire to live, to have time for atonement to my God, and to you all, did not kill me at once… I have laid down my plan, and if I am capable of adhering to it, my feelings shall be governed and my temper improved… it shall be checked by religion, by reason, by constant employment.” (Sense and Sensibility, chapter 46) 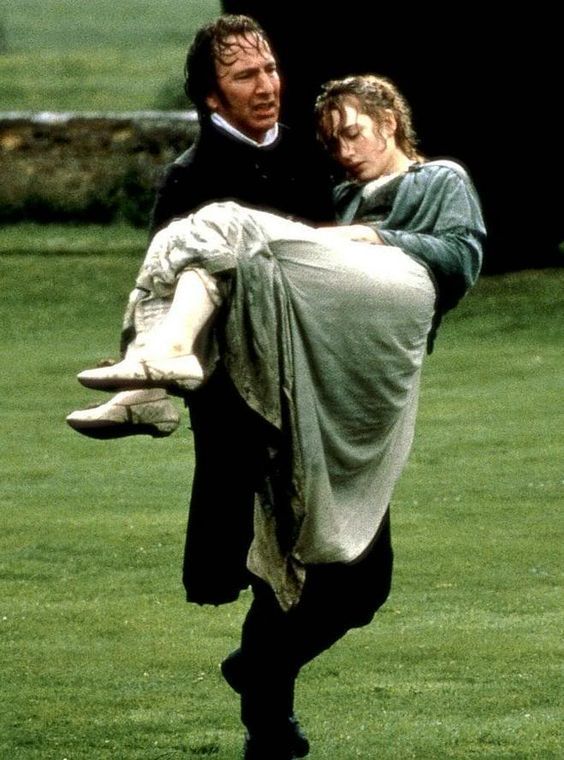 Marianne Dashwood (just like Louisa Musgrove in Persuasion) was profoundly changed by her close call. As it says in the final chapter, She was born to discover the falsehood of her own opinions, and to counteract, by her conduct, her most favourite maxims. She lived to make a far wiser choice for herself, too, in Colonel Brandon.

Good for her! But how much better it would be if we could become wise without the drama of near tragedy to teach us what not to do! – if Louisa Musgrove hadn’t insisted on recklessly risking life and limb by jumping from the stairs in the first place, if Marianne Dashwood hadn’t worked herself into a susceptible state by giving free rein to her ‘excess sensibility.’

The same also applies to the rest of us. Not all disasters are self-inflicted, of course, but many are. Have you, knowingly or unknowingly, placed yourself (or others) in jeopardy by indulging in risky behavior? Are you by bad habits endangering your health in some way? Are you storing up suffering for yourself by neglecting your marriage, your finances, or the discipline of your children?

Blessed is the man who finds wisdom, the man who gains understanding, for she is more profitable than silver and yields better returns than gold…  Long life is in her right hand; in her left hand are riches and honor. Her ways are pleasant ways, and all her paths are peace. She is a tree of life to those who embrace her; those who lay hold of her will be blessed… My son, preserve sound judgment and discernment, do not let them out of your sight; they will be life for you, an ornament to grace your neck. Then you will go on your way in safety, and your foot will not stumble; when you lie down, you will not be afraid; when you lie down, your sleep will be sweet. Have no fear of sudden disaster or of the ruin that overtakes the wicked, for the LORD will be your confidence and will keep your foot from being snared. (Proverbs 3:13-26)

God himself is the source of all wisdom – the starting point, the essence, the sum total, the final word. Where you lack understanding, ask him and he has promised to give it generously without reproach (James1:5). May you then be wise enough to apply it. And when, in his goodness, God brings you safely to the end of another day, remember, like Jane Austen wrote, to give him fervent thanks!