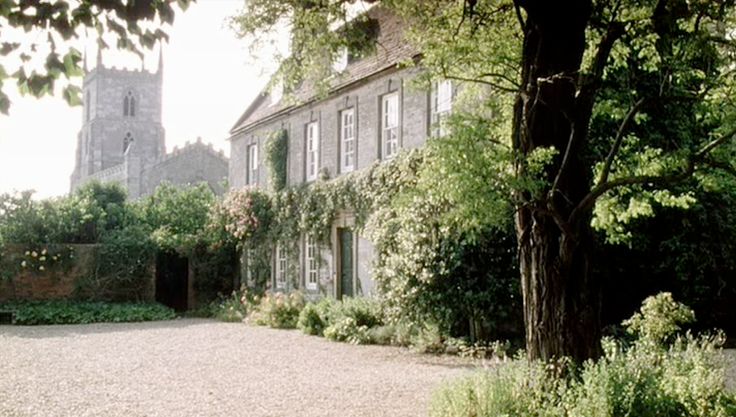 As most of you know, writing “missing scenes” is a particular passion of mine. Although, the scene I’m going to share with you today – what takes place when Mr. Darcy first comes to Hunsford – is not so much “missing” from P&P as “expanded” and written from a different perspective: Charlotte’s. It actually appears in The Ladies of Rosings Park. Hope you enjoy it!

[Mr. Darcy’s] arrival was soon known at the Parsonage, for Mr. Collins was walking the whole morning within view of the lodges opening into Hunsford Lane, in order to have the earliest assurance of it; and after making his bow as the carriage turned into the Park, hurried home with the great intelligence. On the following morning, he hastened to Rosings to pay his respects. There were two nephews of Lady Catherine to require them, for Mr. Darcy had brought with him a Colonel Fitzwilliam… and to the great surprise of all the party, when Mr. Collins returned the gentlemen accompanied him. (Pride and Prejudice, chapter 30)

Receiving Visitors at the Parsonage

I took some small satisfaction in preventing my husband from running off to Rosings the moment he saw the expected visitors arrive. But I could not make him listen to reason the following morning when I diplomatically suggested it was far too early in the day for a call to be considered polite.

“Nonsense,” he said. “When the compliment of a call is required, it cannot be paid too soon. Indeed, were I to delay another moment, it would be an insult to my esteemed patroness and to her honored guests. I am very far from fearing I will be turned away. I flatter myself that I am on such a footing at Rosings that I shall be very welcome. Her ladyship is always ‘at home’ to me.”

A wife owes it to her husband to do what she can to elevate him, so that his prospects are better for having her at his side. I believe in the sagacity of this universal truth. Consequently, since my coming to Hunsford, it had been my chief aim to direct, by subtle means, sounder judgment and more sensible behavior in the man I had married. I was not always successful, however.

What occurred when Mr. Collins arrived at the great house, I do not know in full. He never seemed conscious of having blundered in any way. And he could not have offended very greatly, I suppose, since when Mr. Collins returned to the parsonage he was accompanied by Mr. Darcy and his cousin Colonel Fitzwilliam. Mr. Collins took this triumph as a compliment to himself, I believe, but I gave the credit for it entirely to Elizabeth. No doubt she was the one the gentlemen were eager to see.

When I espied all three of them from the window, crossing the road in our direction, I informed her and Maria what an honor was in store for us.

“I may thank you, Eliza, for this act of civility,” I concluded. “Mr. Darcy would never have come so soon to wait upon me.”

“You are mistaken, Charlotte,” she said. But that was all she had time for before the gentlemen entered to pay their compliments. Since a suspicion of Mr. Darcy’s being partial to my pretty friend had already been awakened within me, I was on alert for any confirming signs. He barely spoke, however, to Lizzy or to anybody else.  He sat composedly but silently, allowing Colonel Fitzwilliam to bear the weight of the conversation. The only sign that I might not have been entirely wrong was that I noticed Mr. Darcy’s gaze, if little discourse, was very often directed at Elizabeth.

Meanwhile, Elizabeth largely ignored him for the more amiable company of the colonel, whose manners one could not help but admire.

At length, however, Mr. Darcy’s courtesy was so far awakened as to enquire of Elizabeth after the health of her family. She answered him in the usual way, and after a moment’s pause, added, “My eldest sister has been in town these three months. Have you never happened to see her there?”

Understanding Elizabeth and her ways so well as I did, I knew there was more to her question than what the words themselves revealed. She was testing Mr. Darcy to see what he would say. She was tormenting him with the trouble of constructing an answer. She meant to tease him. She meant to place an irritating pebble in his shoe. My guess was that she wanted to remind him of Jane and his presumed interference there, for Lizzy had always believed Mr. Darcy responsible for removing Mr. Bingley from her sister’s side.

“I.. I cannot recall. That is, I cannot recall that I did see Miss Bennet. Well, in fact, no… No, I was not so fortunate as to have the pleasure of meeting with your sister in London. But then, that is hardly surprising, is it? There are so very many people, and one tends to only come across those who move in one’s own circle.”

“Quite so, Mr. Darcy,” Lizzy answered with a satisfied smile, as if she had made her point. “That is exactly what I thought you would say.”

Their eyes held for another moment or two, and I had the impression that Mr. Darcy was deciding whether or not to say anything more. In the end, he only walked off to the window in silence.

The gentlemen soon went away, but we would see them several times more while they remained at Rosings. I was interested to observe what, if anything, would develop. There was very little intrigue in my own life, but I had high hopes for finding more in Elizabeth’s.

4 Responses to Visitors to Hunsford: a P&P Missing Scene