For the last month, I’ve been busy with the blog tour launching my latest novel: Murder at Northanger Abbey (see previous post). Someday I’d like to do a “real” book tour, like authors used to. But I suppose it’s just as well this one was designed to be “virtual” instead, because in the current Covid crisis, it wouldn’t have worked for me to travel all the places I’ve visited – various destinations in the US, plus England, Italy, and Portugal – meeting lots of people and signing books in person.

Next up? I have just a few chapters written so far of another P&P book, this one from Mr. Darcy’s point of view. Also, I have not one but two audio books in production! Leap of Hope is already recorded and just needs to go through the editing process. And Murder at Northanger Abbey will hopefully follow close behind. I adore audio books myself, and so it’s a real thrill for me to be able to offer so many of my own in that format!

Now, on to the main topic of this post: the movie Amazing Grace. I first saw this excellent movie several years ago, but current events got me thinking about (and watching) it again.

As you may or may not know, there has recently been some thought-provoking discussion within Jane Austen circles about the presence and the role of non-whites in Regency England. And some very informative articles on the subject have been posted at Jane Austen Variations by my fellow authors over the last few weeks. I will not attempt to duplicate all their fine work, only invite you to read more here and here.

For today, I’ll just reiterate that Regency England was not as homogeneously Caucasian as people often suppose. There were small yet significant numbers of people of color living in England at the time, even some in high position. Jane Austen herself included a mixed race heiress in her unfinished novel Sanditon (expanded into a recently-aired mini-series):

Of these three, and indeed of all, Miss Lambe was beyond comparison the most important and precious, as she paid in proportion to her fortune. She was about seventeen, half mulatto, chilly and tender, had a maid of her own, was to have the best room in the lodgings, and was always of the first consequence in every plan … (Sanditon)

My point is that Jane Austen must have had at least some exposure to people of other races. And although she never addressed wars and political movements head on in her novels, she, and her characters likewise, were not unaware of the major issues of the day, one of those (arguably the most significant) being the debate over abolishing the slave trade that generated so much wealth for the British empire and many of its upper class families, and which is also the subject of Amazing Grace.

The topic is mentioned in passing at least twice in Austen’s novels. In Mansfield Park, Fanny tells Edmund, “But I talk to [my uncle] more than I used. I am sure I do. Did not you hear me ask him about the slave-trade last night?” In Emma, Mrs. Elton exclaims to Jane Fairfax, “Oh! my dear, human flesh! You quite shock me; if you mean a fling at the slave-trade, I assure you Mr. Suckling was always rather a friend to the abolition.”

Amazing Grace (2006) is based on the true story of William Wilberforce (Ioan Gruffudd) and his passionate, courageous, decades-long quest to end British sanction of and participation in the slave trade, a quest that is ultimately successful. Along the way, he faces intense opposition, but he also finds formidable allies in the fight: 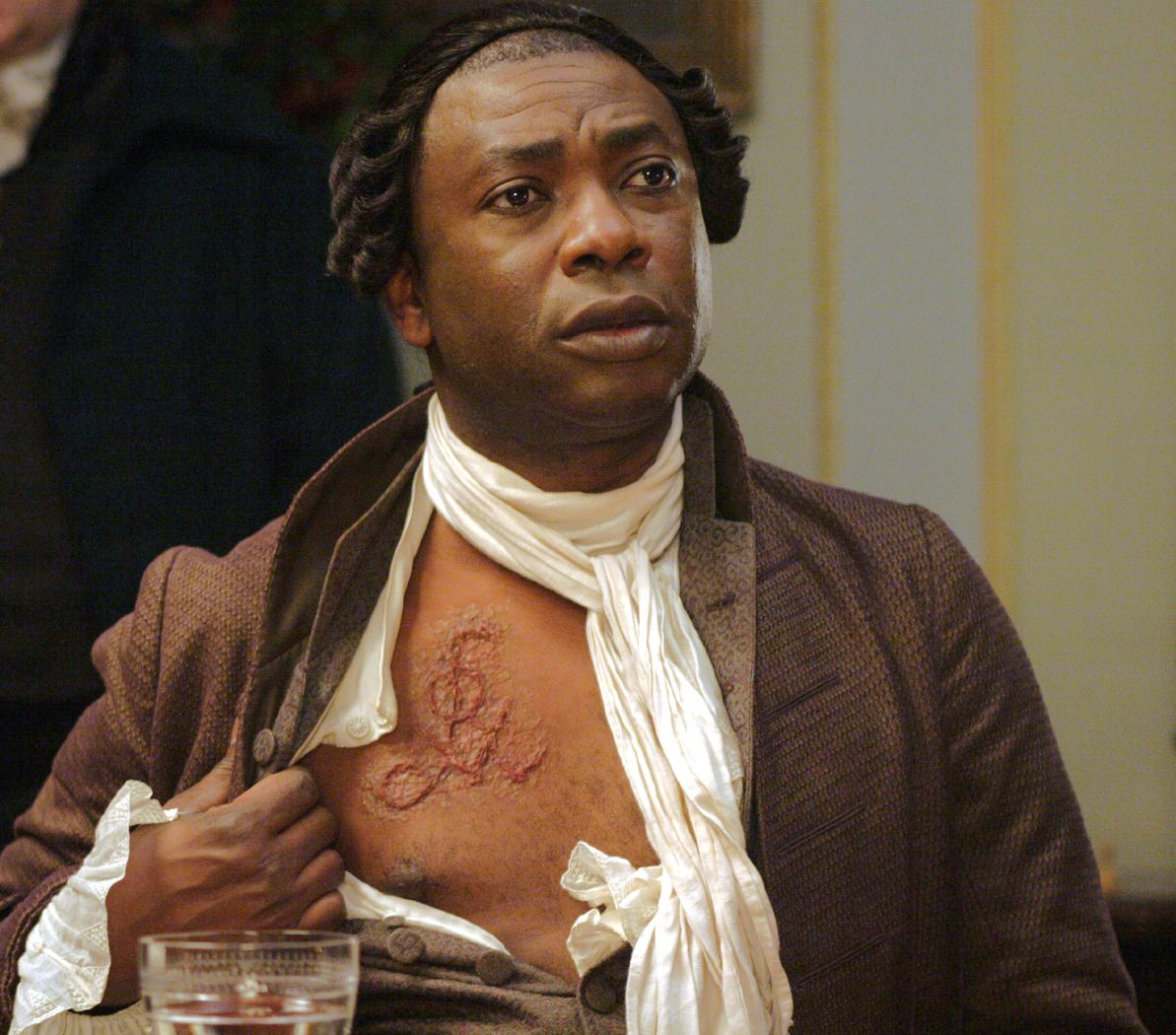 Olaudah Equiano (Youssou N’Dour) a former slave who purchased his own freedom and went on to publish his compelling and hugely successful autobiography depicting the horrors of slavery.

And others, many of the Quaker faith. So while William Wilberforce took the fight to parliament, people from various backgrounds and walks of life worked tirelessly with him, together changing the tide of public opinion and the course of history.

Ioan Gruffud delivers a brilliant performance as Wilberforce. And as you can see, the rest of the cast is stacked from top to bottom with nothing but the best dramatic talent. You can add to this list another old friend from Persuasion ’95: Ciaran Hinds in a less-sympathetic, less-heroic role this time, as Lord Tarleton, an outspokenly pro-slave-trade MP.

As with any dramatization, significant creative licence has no doubt been taken, but my understanding is that the story line follows historical facts pretty closely. And some parts – portions of Wilberforce’s speeches, for example – are taken directly from preserved parliamentary records, etc. That’s the case with the caption in the picture below – what Lord Charles Fox said of Wilberforce when the battle in parliament was finally won. 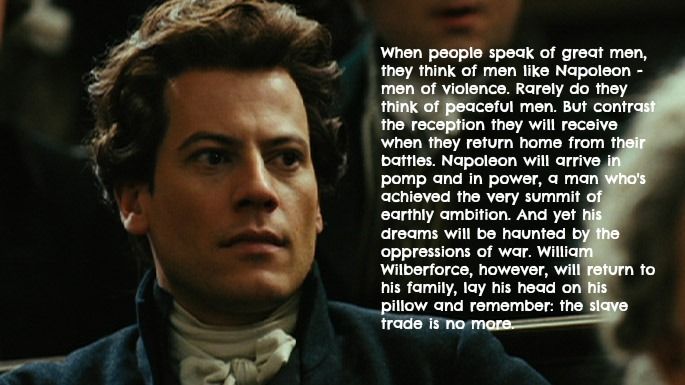 All this took place during Jane Austen’s lifetime.

No movie can be all things to all people. Obviously, no movie can tell every aspect of such a complex, far-reaching, generations-long, globe-spanning issue as slavery. But Amazing Grace does an amazingly good job of illuminating the particular aspect of the story that is its focus: the atrocity of the slave trade and the political fight to end British involvement in it. That is an important story that deserves to be told, heard, and remembered. Amazing Grace is a must-see movie on those grounds alone, even aside from the fact that it is a tremendously well-made film.