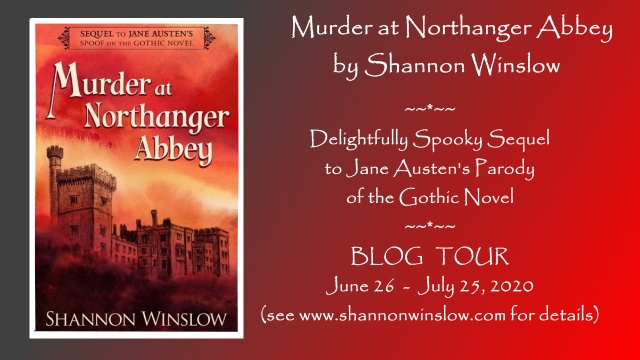 The day is finally here! Maybe some of you have been waiting impatiently for Murder at Northanger Abbey to come out. Believe me, I have too!

Usually I underestimate how long it will take to get everything done and I’m scrambling at the end. So for this book, I decided to be smart and allow plenty of time to finish up all those last-minute details. That way, I wouldn’t be so stressed about making my deadline. Consequently, I’ve been ready for two weeks and have just been waiting for the days on the calendar to tick by. In other words, I still miscalculated, only this time in the opposite direction!

What a revolution in her ideas! She, who had so longed to be in an abbey! Now, there was nothing so charming to her imaginations as the unpretending comfort of a well-connected parsonage, something like Fullerton but better: Fullerton had its faults but Woodston probably had none. If Wednesday should ever come! It did come, and exactly when it might reasonably be looked for. It came – it was fine – and Catherine trod on air.

I thought this would be an appropriate Jane Austen quote to use today because it comes from Northanger Abbey (chapter 26), it speaks of impatiently waiting (as I have been), and of the happiness when the anticipated day finally arrives.

Yes, the waiting is over! Tuesday, June 23rd did come, and exactly when it might reasonably be looked for.

So please join me in celebrating the official launch of my latest book – my 10th! Here’s the Blurb for Murder at Northanger Abbey, a couple of advance reader comments in its praise, and the Blog Tour Schedule. Then I have a surprise for you and also how you can win a copy of the book.

Newly married to her beloved Henry, Catherine’s eyes are now open to the grownup pleasures of wedded life. Yet she still hasn’t quite given up her girlhood fascination with all things Gothic. When she first visited Northanger Abbey, she only imagined dreadful events had occurred there. This time the horror is all too real. There’s been a murder, and Henry has fallen under suspicion. Catherine is determined to clear her husband’s name, but at the same time, she’s afraid for her own safety, since there’s a very good chance the real murderer is still in the house.

This delightful sequel reprises the mischievous spirit of Austen’s original spoof on the Gothic novel, while giving Catherine a genuine murder mystery to unravel.

“WOW! This book is absolutely incredible! It is intriguing, mysterious, romantic, and such a great continuation of ‘Northanger Abbey!’ Whenever I picked up ‘Murder at Northanger Abbey,’ I was whisked back in time, and went on quite an adventure!”

“I have just finished Murder at Northanger and I really loved it… I re-read Northanger Abbey before starting Murder at Northanger, and it felt as if I was reading the same book. Both the writing style and the characters remained very close to Austen’s, so this was very well achieved in my opinion. I particularly loved to see what you did with Catherine’s character, I do not believe she is a very interesting character, but you made her interesting, and that is impressive…”

“…this is a sensational sequel and I hope Shannon Winslow feels the urge to write more mysteries set in Jane Austen’s literary world, of course. I would recommend this book for not only those who enjoy Jane Austen-inspired fiction, but also those who appreciate historical cozy mysteries.”

I hope that when you read the book, you feel the same way!

Blog Tour Schedule: (links will be added as the posts go live)

Now, I promised you a surprise.

From the title, you will already have perceived that somebody dies in this book. But who? That is the question.

Months ago, I did an unofficial poll, asking readers who from Jane Austen’s original story they would like to see turn up dead. It seems there are several unpopular characters people think deserve to be murdered, but I could choose only one. So I will tell you this much; it was either 1) Isabella Thorpe, 2) John Thorpe, 3) General Tilney, or 4) Captain Tilney.

To be more specific could be considered a spoiler, even though the answer is revealed early in the book. So I will leave it up to you if you want to know now or not. If you do, you will find the answer at the bottom of the launch post running concurrently at Austen Variations. While you’re there, you can enter the giveaway to win a copy of the book. Just leave a comment there!

Murder at Northanger Abbey is available at Amazon (paperback, Kindle) and Barnes & Noble (ebook). Audio will be coming asap!

7 Responses to Book Launch for “Murder at Northanger Abbey”