s it possible to have too many Williams? I like the name – very much, in fact. Even so, there ought to be a limit as to number.

One thing I’ve learned as a novelist is that you shouldn’t confuse your readers with character names that are too similar. If you’ve already got a Terry in the story, don’t name somebody else Jerry. If you have a Ron, don’t add a Don or a Rod. It’s even worse if the names are foreign-sounding, unpronounceable, and all begin with the same letter of the alphabet. Have you read books like that? It’s a nightmare trying to keep the characters straight.

And yet, to a lesser extent, that’s what Jane Austen did in Pride and Prejudice. Her leading man she named Fitzwilliam Darcy, and then she added a Colonel Fitzwilliam to the mix, the odious William Collins, and a Sir William Lucas for good measure.

The two Fitzwilliams I understand; Darcy was christened with his mother’s maiden name, which, naturally, is also his cousin’s last name. Probably a common practice at the time (and something I actually carried forward to the next generation by naming D&E’s son “Bennet” in The Darcys of Pemberley). In truth, there really wasn’t any confusion in the original story. Fitzwilliam Darcy is “Mr. Darcy” to one and all, and Colonel Fitzwilliam is either “Fitzwilliam” or “Colonel.” Mr. Collins is always just “Mr. Collins,” and Sir William Lucas, a minor character, is referred to as “Sir” William. That was clear enough. 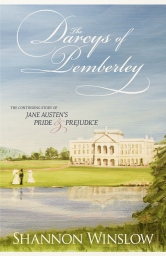 ran into trouble right away, however, when I began writing my first sequel (The Darcys of Pemberley). Although Elizabeth might continue calling her husband “Mr. Darcy” in formal situations (just as Mrs. Bennet did with Mr. Bennet in P&P), she probably wouldn’t in the comfort of their own home and family. She would probably have called him Fitzwilliam. But then what happens when Colonel Fitzwilliam shows up? Since he was a major player in the story as well, I had to come up with a solution, or there would be a lot of awkward conversations. Elizabeth says, “Fitzwilliam, do you agree with Fitzwilliam’s position on the subject?” Then one of the gentlemen called Fitzwilliam answers, but we’re not sure which one it is!

I decided that, to avoid confusion, Elizabeth would call her husband “Darcy,” whether that was entirely correct or not. Crisis temporarily averted.

But when I started Miss Georgiana Darcy of Pemberley, the difficulty only got worse. It’s written in first person from Georgiana’s point of view, and she would be constantly referring to her brother in thought and dialogue. So what was she going to call him? I might get away with “Darcy” for Elizabeth, but not for Georgiana! Once again, she couldn’t refer to him as “Fitzwilliam” because the other Fitzwilliam would feature even more prominently in this book than in my first. And although I had sidestepped the issue in TDOP by having Georgiana use “Brother” on the few necessary occasions, I couldn’t go on like that through the length on an entire novel! No.

Consequently, Georgiana informs us early on that she typically calls her brother “William,” and all is well… for a time.

Late in the story, however, Sir William Lucas enters the action and shows up at the same place and time as the other two men. Now I have a new variation of the original dilemma. Instead of two Fitzwilliams, I have two Williams! It took some fancy footwork to maneuver through that scene without confusion and without endless repeats of the names William, Sir William, and Fitzwilliam. Here’s an excerpt, in Georgiana’s words:

Then I noticed a large party of horsemen approaching from the north, trailed at some distance by a carriage. It was quite an unusual sight, and all eyes turned from their work to watch the spectacle. I was wondering at the meaning of it, even growing a little fearful, when I began to suspect something familiar in the figure leading the group rapidly onward. As they drew nearer, I was certain.

Then I took another look. “And Colonel Fitzwilliam,” I added. Although I suppose I should not have been so surprised that William would come in search of me, I was entirely mystified as to why a party the size of a small army would accompany him. And what on earth was Fitzwilliam doing among them?

These questions were set aside for the moment, for William was upon us. He drew his horse to an abrupt halt, quickly slipped from the saddle, coming to my side and taking me into his fervent embrace. “Are you well, Georgiana?” he asked a moment later, holding me at arm’s length and studying my person for any ill effects. “There has been trouble here. Have you come to any harm?”

“I am well,” I quickly assured him, “as are the others. Only a few bumps and bruises. It was a minor accident caused by a broken axle, and Sir William has been taking very good care of us.”

“Thank God,” he exclaimed as he took a moment to shake Sir William’s hand. “Elizabeth was so certain it had been something much more serious.”

“Elizabeth!” I repeated, reminded of my former alarm. “How is she? If she has been worrying about me, I believe I have spent the same hours fearing something ill had befallen her. In fact, I had the most compelling premonition.”

William laughed, more from relief than amusement, I expect. “What is it with the female mind?” he asked. “Always imagining the worst and perceiving mountains of trouble where there are only molehills…”

As I said above, it was a tricky business getting through that scene without confusion or continual name repeats. In the end, I was saved by the fact that only one of the three men in question had a speaking part in the above exchange. I made sure of that!

Another variation of the same challenge confronted me with my latest novel, The Ladies of Rosings Park (due out early next year), which is written primarily from Lady Catherine’s and Anne de Bourgh’s points of view. In P&P, Lady Catherine calls her nephews “Darcy” and “Fitzwilliam,” but I couldn’t imagine their younger cousin doing the same. And Anne has no lines of dialogue in the book for Jane Austen to set me a precedent. I decided that Anne would follow Georgiana’s example. She calls Mr. Darcy “William,” and Colonel Fitzwilliam she calls “John” – his given name in my books. (Here is another possible source of confusion, since many other JAFF writers have settled on “Richard” instead! Jane Austen doesn’t tell us.)

I have no choice with a sequel; I need to do the best I can with the cast of character names I have inherited from the original. And you would think I’d have learned my lesson in the process. But I actually set myself a bigger challenge in The Persuasion of Miss Jane Austen, where I wrote two stories running parallel – what was happening in Jane’s own life set alongside what she described in Persuasion as a reflection of it. I had two of everything: two heroines (Anne and Jane), two captains (Wentworth and Devereaux), and two admirals (Croft and Crowe). The admirals were the hardest to keep straight because of the similarity of names. Argggh! And no one to blame this time but myself.

I swear I’ve finally learned, though. No more similar names and no additional Williams allowed!

author of historical fiction in the tradition of Jane Austen
View all posts by Shannon Winslow →
This entry was posted in Jane Austen, Uncategorized, writing and tagged Miss Georgiana Darcy of Pemberley, Mr. Darcy, name confusion, novels, Pride and Prejudice, Pride and Prejudice sequels, Shannon Winslow, The Darcys of Pemberley, The Persuasion of Miss Jane Austen, writing. Bookmark the permalink.