A Tale of Two Movies 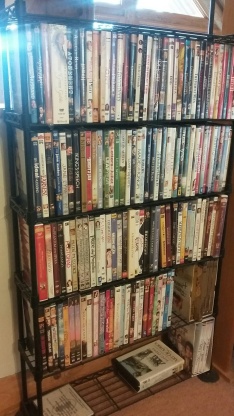 I watched two new movies this past week – first the Hallmark Channel’s Unleashing Mr. Darcy and then, a couple of days later, I rented the recently released version of Far From the Madding Crowd.

I had looked forward to seeing them both. So few films are made for my particular demographic. “Mature women of refined taste and sensibilities” are largely neglected by Hollywood, it seems. But now I had not one but two excellent prospects, each looking like it would be right up my alley! I hoped to like them so well that they would both soon find places of honor, filed alphabetically in my permanent video library. (See related post: My Movie Picks)

As it turns out, though, one of the two will make the cut and the other won’t. 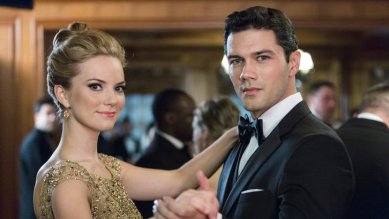 Let’s begin with Unleashing Mr. Darcy – a modern day take on Pride and Prejudice set in New York against the backdrop of elite dog shows and a posh country estate. Here’s the blurb:

Elizabeth Scott (Cindy Busby), is fishing for direction in her life and gets the opportunity to professionally show her Cavalier King Charles Spaniel in a fancy New York dog show. Dog show judge Donovan Darcy (Ryan Paevey) comes across as aristocratic and rude and a chain of misunderstandings unfold during the competition, complicating their mutual attraction. In true Jane Austen fashion, Elizabeth and Donovan begin to see the error of their ways and it turns out Mr. Darcy is far more kind and interesting than Elizabeth ever imagined.

All the pieces were seemingly in place: rich and handsome but rather snobby guy, cute and spunky girl who’s a bit too outspoken for her own good, and counterparts for all the other P&P characters as well (Darcy’s sweet little sis, horrid aunt, and a Miss Bingley styled rival for Elizabeth). Unfortunately, the whole thing fell kind of flat, at least for me.

This was a typical Hallmark Channel production – no better and no worse than the rest.

You would think Hallmark movies were made just for me, since I’m all about romance and happy endings – Hallmark’s stock and trade. So it’s hard to explain why I’m not a big fan. Maybe it’s the same reason I don’t much care for standard “romance” novels. The formulaic, low-budget, mass-produced nature of both tends to result in less original, lower quality fare. Makes it difficult to sink my whole heart into the story and fall in love. 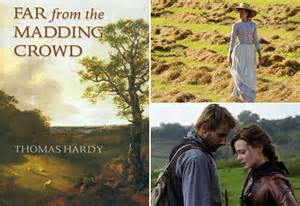 Far From the Madding Crowd, based on Thomas Hardy’s classic novel of the same name, resides at the other end of the spectrum in so many respects. It’s clear no expense was spared in any department, from the well-written script, to the top-drawer cast, beautiful sets, costumes, locations, and wonderful cinematography. Here’s the blurb:

The story of independent, beautiful and headstrong Bathsheba Everdene (Carey Mulligan), who attracts three very different suitors: Gabriel Oak (Mattias Schoenaerts), a sheep farmer, captivated by her fetching willfulness; Frank Troy (Tom Sturridge), a handsome and reckless Sergeant; and William Boldwood (Michael Sheen), a prosperous and mature bachelor. This timeless story of Bathsheba’s choices and passions explores the nature of relationships and love – as well as the human ability to overcome hardships through resilience and perseverance.

I know that Thomas Hardy stories don’t always end well, but this one does, fulfilling one of my very basic requirements. And the movie does a good job sticking to the book in essentials. Apparently, the film’s producers didn’t feel the need to pointlessly “improve” on a story that has stood the test of time. Hooray! 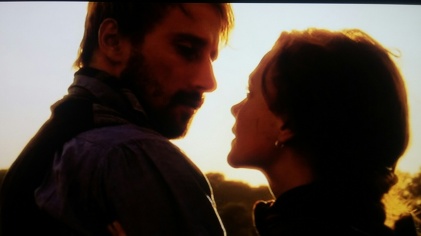 Anyway, I watched Far From the Madding Crowd twice before being forced to return it. Now it’s at the top of my wish list for what my husband or sister can get me for my birthday in a few weeks. I can hardly wait to file it in the F section of my collection between The Family Man and Father Goose!

I guess the way I feel about these two movies also reflects my philosophy about my own writing. I would much rather produce one book per year to suit myself than to be obligated by contract to crank out one every four months to suit somebody else. Other authors may be entirely capable of maintaining quality under those circumstances; I could not.

I have a pretty good model in Jane Austen of striving for quality over quantity. As much as we might wish she had left us more, wouldn’t we all rather have her six wonderfully written novels than a whole slew of books we could not care for?

God willing, I will complete my sixth novel this year and hopefully a few more after that. I’m not likely ever to become rich or famous, though, and I’m okay with that. Like Catherine Morland below, I am content. I am perfectly satisfied with my share of public attention.

She was looked at, however, and with some admiration; for, in her own hearing, two gentlemen pronounced her to be a pretty girl. Such words had their due effect; she immediately thought the evening pleasanter than she had found it before – her humble vanity was contented – she felt more obliged to the two young men for this simple praise than a true-quality heroine would have been for fifteen sonnets in celebration of her charms, and went to her chair in good humour with everybody, and perfectly satisfied with her share of public attention. (chapter 2, Northanger Abbey)

17 Responses to A Tale of Two Movies