A few days ago, I revealed the cover for my upcoming book at Austen Variations – front only – and shared some of the thoughts behind the design. But I had to hold a little something back for my own blog. So now, for the first time anywhere, here is the full cover for Miss Georgiana Darcy of Pemberley, scheduled to release in a few weeks. 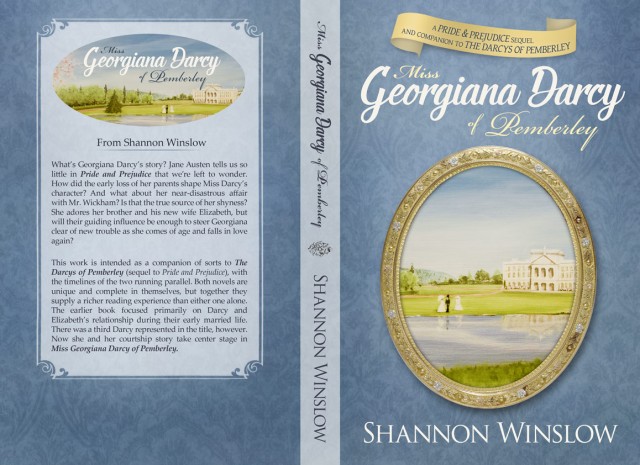 As I said in that earlier post, I wanted the design to reflect the fact that this book is related to The Darcys of Pemberley but not to be so similar that it’s mistaken for it. So we’ve used the same artwork, the same color palate, and some of the same words in the title, but it’s all assembled in a fresh, new way. I’m delighted with the way it has turned out!

Comments from others have been all positive as well – from the “elegant” background to the “perfect” miniature painting on the front. One reader thinks the oval frame makes the picture look like a brooch someone might wear, which I thought was an inspired idea. I may look into what it would take to get such a thing made. Anybody want to pre-order one of your very own? Notice that the oval motif is repeated on the back as well, where my designer, Micah Hansen, has created another lovely vignette from the original artwork.

We have nothing from Jane Austen on the subject of the perfect book cover, since nothing of this sort was known in her day. But in a word search of the data base for “cover,” I did come across this passage from one of her letters, where Jane advises her niece Anna on that young lady’s attempt at a novel:

Your Aunt C. does not like desultory novels, and is rather afraid yours will be too much so… I allow much more latitude than she does, and think nature and spirit cover many sins of a wandering story…”

Does my story wander? I admit, it does meander a little, following Georgiana’s narration along her indirect path to a happy ending. Perhaps the fact that I have wrapped the whole thing in a pretty cover will help to obscure any flaws.

I hope you are as pleased with the cover as I am – both front and back. More importantly, though, I’ll be eager to hear what you think about what’s in between!

Miss Georgiana Darcy of Pemberley will be available on July 21st! If you want a sneak peek before then, I invite you to read the first chapter here on my site. Other preview excerpts are posted at Austen Variations on March 23, March 30, April 27, and May 26.