The blog tour for my recently released novel is winding down. It’s been a challenge to do it, but every one of these posts has been different, so that anybody following me all the way through will be spared the annoyance of reading a rerun. My latest contains an introduction to the men of Return to Longbourn, as well as a new excerpt. Don’t miss a stop at Barbara Tiller Cole’s Darcyholic Diversions, where I visited a couple of days ago. If you haven’t yet found your way on your own, here’s the link.

As I told you two weeks ago, I’ve begun working towards getting my books into the audio format – very exciting, yes! But also a lot of difficult choices to make, important questions to decide. Which narrator would do the best job? What payment terms should I offer him/her? Should I sign on for an exclusive publishing contract with better royalties, or hold on to my rights? The pros and cons of each option have been chasing round and round in my mind for days to where I’m totally stymied. I think I’ve officially achieved the state of analysis paralysis.

Analysis paralysis – The condition of being unable to make a decision due to the availability of too much information, which must be processed in order for the decision to be made.

So, once again, I turn to my role model and ask what Jane Austen has to say on the subject.

On first perusal, her characters seem remarkably decisive. Marianne Dashwood made instant judgements about what she wanted, and Elinor never wavered about what was right and wrong (one guided primarily by sensibilities, the other more by sense). Elizabeth Bennet didn’t hesitate to reject Mr. Collins’s proposal, even though (as he scrupled not to point out) her other prospects were limited. Even Anne Elliot, despite the years of suffering it had caused her, proclaimed in the end that she had been right at age seventeen to submit to Lady Russell’s persuasion and break off her engagement to Captain Wentworth. 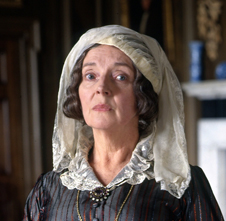 But, if you’re looking for someone who absolutely never doubted her decisions, Lady Catherine de Bourgh takes the cake:

There was little to be done but to hear Lady Catherine talk, which she did without intermission till coffee came in, delivering her opinion on every subject in so decisive a manner as proved that she was not used to have her judgement controverted.

In Mr. Bennet, we find lack of good judgement, but no lack of confidence when deciding to allow Lydia to go with the Forsters to Brighton. Emma falls into this same category by virtue of her bad advice to Harriet to reject Robert Martin’s offer of marriage. Other standouts in the “bad judgement” classification are Lydia Bennet and Isabella Thorpe – for their monstrously poor taste in men – but here again we don’t read that they had any difficulty making up their minds on the subject.

No, I could only think of one instance where someone in a Jane Austen novel truly agonized over a decision. That was when Mr. Darcy debated within himself if he should turn his back on his pride, his will, his reason, and his family obligations – all to offer for Elizabeth Bennet’s hand! Fortunately for her (and for us!), he finally came to the right conclusion.

“In vain have I struggled. It will not do. My feelings will not be repressed. You must allow me to tell you how ardently I admire and love you.”

So what has any of this to do with my current situation. Probably nothing. But, after a day of reading legal contracts and evaluating complicated royalty payment structures, this little ramble was a pleasant diversion. Tomorrow, I swear, I’ll face up to the business at hand and break through the log jam somehow. If all else fails, I may resort to the flip of a coin. Too bad I can’t call Lady Catherine; I’m sure she’d be happy to tell me what to do.