If you have been following me closely, you know that I  recently finished writing the next installment of my P&P series, picking up the story again five years after the close of The Darcys of Pemberley. Whilst the manuscript for Return to Longbourn is out to a few trusted “beta readers,” it’s time for me to pick up my paintbrush again and produce cover art for the novel. I’ll be continuing my tradition of featuring an English manor house (see the covers on the right sidebar), in this case an artist’s interpretation based on Luckington Court, Wiltshire, used as Longbourn in the ’95 film version. 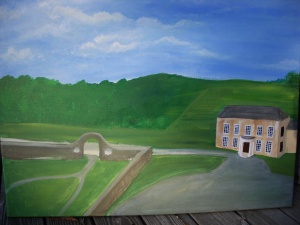 Here’s the unfinished painting, which will wrap around from the front to the back of the book.  It has a long way to go, but the sky is done and the rest of the essential elements blocked in. On the left side is the beginnings of the garden where Elizabeth and Lady Catherine have their showdown toward the end of Pride and Prejudice. Lady Catherine says…

“Miss Bennet, there seemed to be a prettyish kind of a little wilderness on one side of your lawn. I should be glad to take  a turn in it, if you will favour me with your company.” …They proceeded in silence along the gravel walk that led to the copse; Elizabeth was determined to make no effort for conversation with a woman, who was now more than usually insolent and disagreeable. (Pride and Prejudice, chapter 56)

This same garden is the setting for a scene between Mary and Kitty in Return to Longbourn. I even borrowed a line and a half from the original for my story, which fit seamlessly into mine.

“Come, Mary,” said Kitty, taking up her sister’s hand and pulling her toward the front door. “Let us leave Mama in peace and go out to the garden to cut some flowers for the table.”

“Yes, you girls go on,” agreed Mrs. Bennet. “Take yourselves out of doors, and your noise with you, for I cannot bear another sound. My head is very ill today.”

Seeing that their mother truly wished them away, the Miss Bennets could not but oblige her.

Venturing forth, consequently, they proceeded in silence along the gravel walk that led to the copse. Mary was determined to make no effort for conversation, still supposing her sister to have nothing more worthwhile than gossip to divulge. And Kitty willingly postponed beginning the conference a few minutes longer, scarcely knowing whether the keeping or the telling of her secret intelligence would prove the more harrowing.

This scene represents an important turning point in the book, and in my mind I can clearly picture the conversation between sisters and the garden in which it takes place. My challenge now is to express that setting on canvas. I hope I can pull it off. Stay tuned to see what happens!

(PS – For a couple longer excerpts of the novel, go to the Return to Longbourn page)

3 Responses to House and Garden