My son is getting married in January, and I’ll be attending a bridal shower for his fiance this Sunday! But that’s not the only reason I have weddings on my mind. The other? It’s all the big doings over at Austen Authors this week.

As you know by now, we have been celebrating the upcoming 200th anniversary of the publication of Pride and Prejudice with the P&P200 Project (for which I’ve written several posts) – tracking the events of the novel in “real-time,” and adding “missing scenes” and additional viewpoints. The whole project comes to a climax this week with the double wedding (implied) at the end of the book.

Happy for all her maternal feeling was the day on which Mrs. Bennet got rid of her two most deserving daughters. With what delighted pride she afterwards visited Mrs. Bingley and talked of Mrs. Darcy may be guessed. (Pride and Prejudice, chapter 61)

These are my two wedding-related posts at Austen Authors this week: 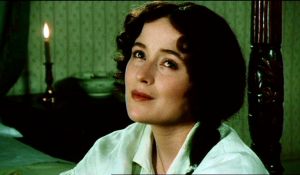 Elizabeth Reflects on Questionable Marital Advice: (In her own words…) I know that many brides go to the altar in complete ignorance – and consequently in great trepidation – of what will follow afterward. Neither Jane nor I shall suffer such an unfortunate fate, however. No, with our double wedding only a few days off, I expect we will both be supplied sufficient information on the topic in time. We shall have enough in quantity, at least. Considering the available sources, it is the quality of the information that is in doubt… (continue here)

– Sorry, this post is no longer available at Austen Authors, but I have given you the following one in total here on site to make up for it:

Caroline’s Wedding Reflections:  “How thrilling!” a woman in the pew behind said in hushed excitement. “A double wedding!”  Caroline Bingley rolled her eyes heavenward and leant closer to her sister. “Double disaster, more like,” she whispered. Although she had no choice but to attend this farce, she did not have to make believe she liked it.

Her brother’s choice of bride was truly a disaster. He might have married a girl form one of the best families, someone who would have enhanced the prestige of the Bingley name… and perhaps added to the family’s fortune as well. What had they all been working for, after all, if not to raise themselves to where nobody would ever remember their humble origins again? Louisa had done her part, at great person sacrifice. But Charles! He was this minute throwing his one chance away on a nobody, and there was nothing she could do about it.

Caroline could not bear to watch her brother disgracing himself, but she did hazard a glance in Mr. Darcy’s direction… and a sigh. Were there any justice in the world, she would have been the one standing up beside him now, the one he was regarding so tenderly, the one to whom he plighted his highly covetable troth. It was unaccountable – and patently unfair – that after all her efforts, all her attentiveness, he should also prefer a Miss Bennet! It was not to be borne!

Had Darcy determined to marry Miss de Bourgh over herself, she might have understood, for then she would have been beaten by the undeniable claims of a noble bloodline and a superior fortune. But what did Miss Eliza Bennet have to boast of… except for those notorious “fine eyes”?

It was indeed a harsh blow, and one that was not to be recovered from anytime soon.

For all the courtship and romance in Austen’s novels, she never actually gives us a wedding scene. Readers never see her characters at the altar in the original book. We are therefore obliged to use our imaginations. Not a problem!

Update: You can find a lot more P&P “missing scenes” (including a lot more about the wedding!) in Pride and Prejudice: Behind the Scenes, written by the authors of Austen Variations, who contribute all profits from the book to Jane Austen charities!