What Was Wickham Thinking?

Mr. Wickham was the happy man towards whom almost every female eye was turned, and Elizabeth was the happy woman by whom he finally seated himself. (Pride and Prejudice, chapter 16)

Pride and Prejudice, the best known and probably best loved of Jane Austen’s novels, was published in January of 1813. That’s almost 200 years ago now! To commemorate the upcoming anniversary, Austen Authors has a running project called P&P200 (for obvious reasons), which expands in “real time” on events in the original novel. In other words, stuff that happens in the book in February, May, or October will be explored in February, May, and October of this year. A P&P200 post might depict a “missing scenes” (something alluded to, but not shown in the original), or possibly an existing scene told from a different character’s viewpoint.

Pride and Prejudice is written mostly in Elizabeth Bennet’s point of view. But wouldn’t it be interesting to know what’s going on in the heads of some of the other characters? especially the villains? That’s what my P&P200 assignment was today – to write a familiar scene from chapter 41 using an unfamiliar perspective:

Mr. Wickham is a smooth operator who’s used to talking his way out of tight spots and charming the ladies with equal dexterity. When Elizabeth returns from Hunsford, however, she’s on to him. Her eyes have been opened by Darcy’s letter, and she knows the truth. But Wickham doesn’t know she knows. We’ve seen this situation from Lizzy’s perspective. Now let’s find out… What Was Wickham Thinking?

He was by no means discouraged. Mary King may have slipped through his fingers, but what did it matter? There were plenty more fish in the sea. And after all, it would have been selling himself pretty cheap to settle for a freckled face with only ten thousand pounds. He could – he would! – do better in the end for being rid of her.

In the meantime, it might be entertaining to renew his flirtation with the intriguing Elizabeth Bennet. He’d had the girl fairly eating out of his hand before she went to Kent and, with any luck, absence had made that naïve young heart grow even fonder of him.

Marrying Miss Bennet was still out of the question, but bedding her was not. In fact, it would be just the thing to cheer him. A little flattery, a few of his boyish smiles, charm skillfully and liberally applied, and she would be his. The juicy peach was ripe for the picking, and who was better equipped to do it properly?

Such were George Wickham’s contemplations upon learning that Elizabeth Bennet had returned to the neighborhood. But a fortnight later, after having been frequently in company together, precious little headway had he made with her despite all his varied and strenuous exertions.

Mr. Wickham was now to see Elizabeth for perhaps the final time. On the very last day of the regiment’s remaining in Meryton, he dined with the others of the officers at Longbourn. Although he had nearly given up on the idea of an actual conquest (the time for that sort of thing running perilously short), he fully intended that Elizabeth should be excessively sorry to see him go all the same. And once he was away, she would no doubt repine, sorely regretting having held him at arm’s length. 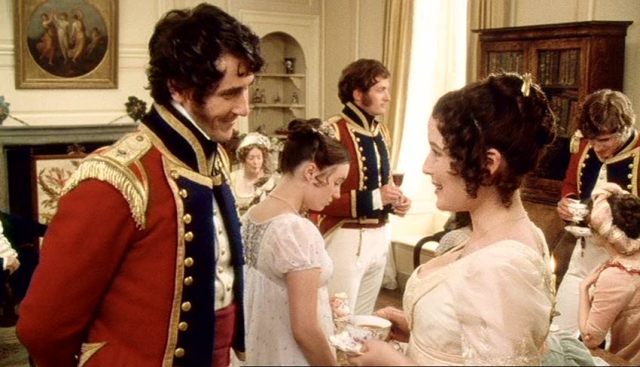 After dinner, Mr. Wickham adeptly drew her aside and launched his closing campaign to win her over. By way of striking on a new topic – one which he hoped would cast him in a favorably light – he remarked, “You have become quite the traveler, Miss Bennet – now bound for the lake country and only just returned from Kent. Did your time pass agreeably in Hunsford?”

“Yes, it was very pleasant indeed to be reunited with my dear friend Charlotte.”

“And Mr. Collins too?” He grinned conspiratorially. “I am thinking that after a few days the proportions and conversation of the parsonage must have proved… a little confining, shall we say?” Surely, he thought, she could not help but appreciate the contrast with their own lively banter over the course of their acquaintance.

“Not at all, sir, since we were rarely restricted to the parsonage. I am happy to report that we enjoyed a very frequent intercourse with the inhabitants of Rosings Park whilst I was there – a blessing of which very few could boast.”

Wickham looked at Elizabeth quizzically. “Forgive me, but I would hardly have expected you to find Lady Catherine’s conversation to your taste.”

“Oh, but I do not refer to Lady Catherine alone. Did I not tell you that Mr. Darcy and Colonel Fitzwilliam were visiting there as well?”

“Are you much acquainted with the colonel, Mr. Wickham?” Elizabeth continued with a glint in her eye. “I suppose you must have seen him very often at Pemberley as you were all growing up together.”

“Quite true,” he admitted, although he did not like the turn the conversation had taken… or the amused look on Miss Bennet’s face. Could she possibly know something, he wondered. But then, with a moment’s recollection and a returning smile, he replied, “I have not seen much of him in recent years, as you might well imagine. However I believe him to be a very gentlmanly man. How did you like him?”

“Very much indeed! In fact, I believe I have rarely met with a man that I liked better, or whose sound judgment I could depend upon so completely. I found him to be kind, generous, and entirely trustworthy. He was designated Miss Georgiana Darcy’s guardian, you know, and I think there can be no finer testimony to Colonel Fitzwilliam’s character than that.”

Wickham noticed that the room had suddenly grown overly warm. He could feel sweat beginning to bead on his forehead, and the collar of his military jacket drew curiously tighter and tighter round his throat. Affecting an air of indifference he asked, “How long did you say that he was at Rosings?”

Her spirited report quite alarmed him. It sounded as if Miss Bennet had spent the better part of three weeks in the man’s company, talking in depth about all manner of subjects. How near their conversations might have come to his own private concerns, Wickham could only guess. Elizabeth’s way of speaking seemed intentionally designed to torment him with uncertainty, to leave him dangling on tenterhooks. Had she really learned all his secrets? He shuddered at the thought.

When Elizabeth’s animated narrative moved on to Mr. Darcy and her improved opinion of him, Wickham’s uneasiness only increased. There was a something in her countenance which made him listen with an apprehensive and anxious attention.

How he answered her, Wickham hardly knew. Although deeply shaken, his self-command and polished manners did not desert him. He covered his embarrassment as well as he might and carried on, ending with an undeniably handsome speech:

“You, Miss Bennet, who so well know my feelings towards Mr. Darcy, will readily comprehend how sincerely I must rejoice that he is wise enough to assume even the appearance of what is right. His pride, in that direction, may be of service, if not to himself, to many others, for it must deter him from such foul misconduct as I have suffered by.”

He was careful that the last words were accompanied by an appropriately sorrowful bearing and the slightest quavering of his voice. Yet these tried and true tactics proved singularly ineffectual on this occasion. Wickham could see at once that he had failed to excite the lady’s sympathies over his longstanding grievances, as he had so effortlessly done in the past.

Clearly, Elizabeth had changed… towards himself anyway, and those she saw at Hunsford had the blame for it. That he should have lost the devotion of this prized pearl was something he could learn to live with. Knowing his defeat had apparently come at the hands of his old nemesis was quite another thing.

Wickham waited, but Elizabeth made no answer to his invitation to indulge in what had formerly been their favorite topic. Instead, by the curl of her lip and the way she tilted her head to one side, she seemed to be mocking him.

He excused himself from her presence at once and made no further attempt to distinguish her that night. The means to even the score might one day come his way. If so, he surely would not pass them by. Until such time, however, he very much hoped never to see Elizabeth Bennet’s face again.

2 Responses to What Was Wickham Thinking?