Posted on October 1, 2018 by Shannon Winslow

I wish I could tell you I have made great progress on all four of my current writing projects (see three previous posts) in the last month. I did get the play written, but that’s about all I’ve had time to accomplish. I’ve been a little busy with family obligations and with travel. Here are just a few of my vacation photos: 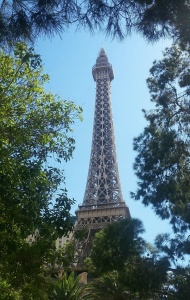 No doubt you recognize these exotic destinations – Venice, obviously, and Paris, one of the great pyramids of Egypt, and the New York City skyline. And that’s only a small sample!

Are you jealous of my world tour? Or are you getting a bit suspicious?

Okay, I confess; the idea of an extended world tour, lovely as it sounds, is pure fiction. In truth, I never left the US, and all these pictures were taken in one place: Las Vegas.

I hadn’t been to Vegas before, and I probably won’t go back again – not really my kind of town. But we sure saw and did some cool stuff while we were there. We visited the neon lights museum, viewed the largest gold nugget in the world, experienced the amazing Fremont Street overhead canopy light show, ate at some interesting restaurants (some outstanding, some not so much), and attended an awesome concert (Queen), which was the reason we made the spontaneous decision to book this trip in the first place.

There’s plenty to do for a few days in Las Vegas, even if you don’t gamble.  But in case you’re wondering how I fared at the casinos, I’m happy to report that I managed to break even. Want to know my secret? If you never place a bet, you can’t lose any money!

Finding a Jane Austen connection for a post about an American gambling Mecca wasn’t easy, but I chose this exchange between Mary Crawford and Edmund Bertram from Mansfield Park:

“The metropolis, I imagine, is a pretty fair sample of the rest.”

“Not, I should hope, of the proportion of virtue to vice throughout the kingdom. We do not look in great cities for our best morality. It is not there that respectable people of any denomination can do most good; and it certainly is not there that the influence of the clergy can be most felt.”

Actually, we did see a lot of churches in the area – quickie wedding chapels, that is. But, no, I would not point to Las Vegas as the example of our county’s best morality!

What brought Jane Austen most to mind on our trip, however, was the day we rented a car and drove down to Lake Havasu City, Arizona, to see the London bridge moved and reassembled there in 1971. It was about 108 degrees that afternoon, but I was determined to leave the comfort of air conditioning long enough to walk across the bridge that once spanned the Thames.

I even had in mind that perhaps Austen herself might have crossed the same bridge on one of her visits to London. Alas, this could not be true, I learned, since the bridge wasn’t constructed until several years after her death. Still it was well worth seeing.

In any case, I’m glad we made the trip to Las Vegas and beyond, but I’m also glad to be home again.

Next, I’m going to take courage and submit my play for consideration. I’ll let you know how that goes – if and when it will be presented. Then it’s back to work to see if I can make some more progress on my other three writing projects. Where does the time go?

I hope you had some big adventures and happy travels this year too.