A Fresh Place of Interest

I don’t remember if I actually said those words, but I definitely thought them when I was first invited to attend a Jane Austen festival there July 14 – 16. In case you’re scratching your head and asking yourself the same question, Port Alberni is a community of about 18,000 people at the end of a long fjord on Vancouver Island, British Columbia, Canada. As part of the festival, local enthusiasts (a group called the Centennial Belles) had decided to attempt breaking the record for the most people gathered in Regency costume – an ambitious goal considering the modest size and remoteness of the town.

Since I was so warmly invited, since Port Alberni isn’t all that far from Seattle (or so it appears on the map), and since I had the weekend free on my calendar, I decided to go. We could make a mini-vacation of it, I thought. The scenery was sure to be spectacular. I’d have the chance to dress up, talk to people about my books, and soak up the general Jane Austen atmosphere. And with a little luck, my husband might even catch the spirit. Surely he would want to support the record attempt by dressing Regency long enough to be counted. At least I dared to hope so.

We ran into a couple of obstacles, though. First, my passport had expired and, even though we (especially those of us in border states, perhaps) tend to think of Canada as our friendly neighbor to the north, technically it is a foreign country, now requiring official documentation from all visitors. New passport obtained, check. 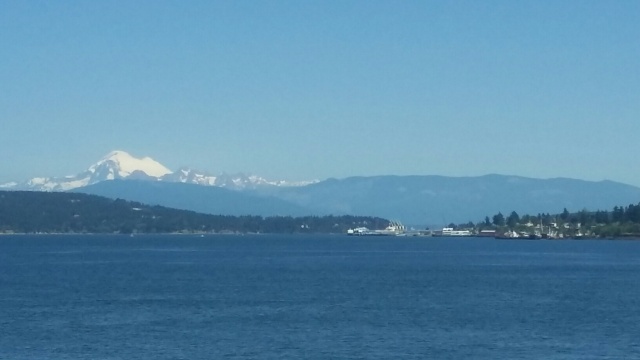 The other significant obstruction was that body of water between us. It may not look like much on the map, but THERE IS NO BRIDGE, and ferries, although a scenic form of travel, don’t schedule their departure times according my own convenience. We also discovered that traffic jams aren’t only a phenomenon of major metropolitan areas like Seattle; they also occur at 5:00pm on Fridays in smaller population centers with smaller capacity roads, apparently. We persevered, however, and safely arrived in Port Alberni about 9:30pm. Those three inches on the map had somehow translated into about 13 hours of travel. 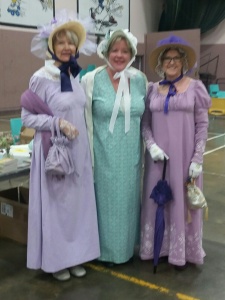 Helena Korin, me, and Suzan Lauder

Well rested after overnighting at a comfortable B&B, we were ready for the big day. The first event on Saturday morning would be the record attempt, at which I and fellow authors Helena Korin and Suzan Lauder had been invited to display our wares. When the official count came in, there was good news and bad news. Although the 286 total beat last year’s number, it unfortunately fell short of the 409 needed to establish a new record. I thought it an impressive total nonetheless, and everybody seemed to be having a good time. 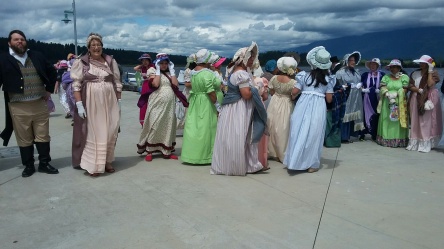 Then it was off to the pier for a promenade, which turned out to be a very windy affair. “Hang on to your bonnets!” Next came a Jane Austen inspired lunch (with my first taste of the celebrated “white soup” – quite tasty!), followed by author readings (I did a well-received excerpt from The Persuasion of Miss Jane Austen), and very entertaining mini-play versions of Persuasion and Emma.

As with most if not all Jane Austen festivals, this one climaxed with a grand ball in the evening. Although not everybody was an expert dancer, everybody was enthusiastic and having a marvelous time!

This kind of dancing (“country dances” like you see in the movie adaptations) is a lot of fun; it doesn’t require an even number of men and women; and it’s something that can be carried on well into later years. If you want to give it a try, go to a JA festival/convention or look for a Regency dance club in your area. 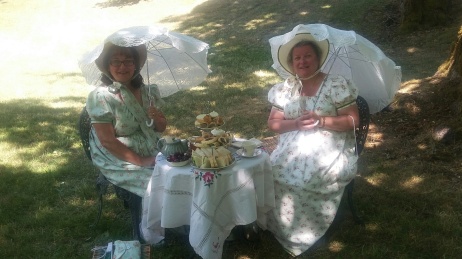 Saturday was a very full day, and I slept well that night. A picnic at a local park was the only thing on the schedule for Sunday. Some people went all out for that too, as you can see. Then it was time to do a little sightseeing before saying farewell to Port Alberni and all the friends we made there.

“…and previously there had been a great deal of enjoyment. So much novelty and beauty! I have travelled so little that every fresh place would be interesting to me – but there is real beauty at Lyme… altogether my impressions of the place are very agreeable.” (Persuasion) 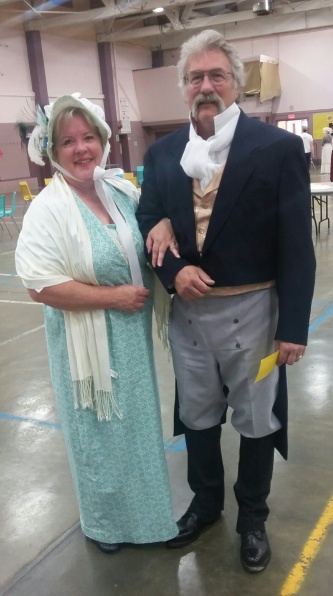 Yes, we had all the above: a great deal of enjoyment, novelty, beauty, and a fresh place that made an agreeable impression on me.

What would I consider my personal highlight, though?  It had to be finally seeing my husband in full Regency dress (for the first and hopefully not the last time) and having the chance to dance period dances with him. That’s a bit of fantasy fulfillment. Sort of a mature Mr. Darcy or Mr. Knightly, don’t you think?

So thank you, Port Alberni and all my new friends! It was a great weekend!

For a related post on the Jane Austen experience, see my post about attending the 2013 JASNA convention in Minneapolis: Having a Ball…

11 Responses to A Fresh Place of Interest