“…But there is nobleness in the name of Edmund.  It is a name of heroism and renown – of kings, princes, and knights; and seems to breathe the spirit of chivalry and warm affections.”  (Mansfield Park, chapter 22)

Fanny Price imbues her beloved Edmund’s name with more latent significance than most of us would, but we at least consider the meanings in the Baby Name Book before deciding what moniker our children will be saddled with for life.

Authors give nearly as much thought to what to title their latest ‘darling child’ before sending it out into the world. It should be something catchy and memorable. It also should give the reader some clue as to what to expect inside the cover.

I actually have a lot of fun with titles, especially chapter titles or names for blog posts, where less is at stake. It tickles me when I can use a fancy word: Elucidation (used as a chapter title in not one but two of my books). I’m a fan of alliteration too, like Jane Austen (Pride and Prejudice, Sense and Sensibility), as evidenced by these chapter titles among others: Sisterly Society, Richard Returns, Wardrobe Woes, Demands of Duty, Company Coming.  I’m not above borrowing a famous phrase now and then: The Play is the Thing, Miles to Go, Teacher Know Thyself, A Tale of Two Movies. And if I can incorporate an inside joke or some double meaning, so much the better: chapter titles Taken For a Ride and Bump in the Road apply literally as well as figuratively. “Persuasion” in my title The Persuasion of Miss Jane Austen refers both to her novel and the fact that she herself was persuaded to give up the man she wanted. Even the title of this blog post has more than one meaning.

I may be outdoing myself on this new book, though (see work-in-progress ). I’m only eight chapters in and I’ve already got some delightful chapter titles, imho. Here they are: Light Dawns, Making Jambalaya, A Day at Disneyland, Possibilities and Perplexities, The Dearly Departing, A Two-Horse Race, Tie Breaker, Going for Broke.

The bigger challenge, however, is coming up with a title for the book itself.

Since it will be part of a series (see Crossroads Collection), I’d love to do something clever with all the titles, like Janet Evanovich’s Stephanie Plum series (One for the Money, Two for the Dough, etc.). I thought of copying the idea, only using First, Second, Third, etc. in each of the successive titles instead of One, Two, Three. Using the word “Leap” in each title would be another way to go. Appropriate, too, since the first one is already tentatively titled Leap of Faith and all will involve time travel. Or I could abandon using a theme word and title each one individually, in which case this new book may end up being called Pemberley or Bust! 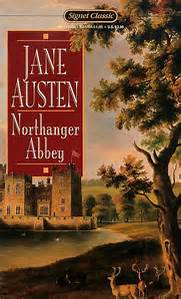 I guess I’m not the only one who has struggled with indecisiveness in this area. Jane Austen changed the titles to at least three of her books before publication. First Impressions became Pride and Prejudice. Elinor and Maryanne became Sense and Sensibility. Northanger Abbey underwent the most transformations. Austen originally called it Susan, after the heroine. Then she changed not only the title of the novel but the heroine’s name to Catherine to avoid confusion with another book that had come out. It was ultimately published as Northanger Abbey after her death.

As for the titles of my upcoming novels (I hope to publish the first two in the series together later this year), I still have time to make up my mind. But I’d love to hear your opinions and brilliant suggestions on the subject! Themed or independent titles? Leap of Faith and Pemberley or Bust? Or propose something of your own.

3/28/16 Update:  After more thought and some reader feedback, I think I’m going to go with the idea of using the word “leap” in all the titles in this series. “Leap of Faith” for the first one, as planned, and maybe “Leap of Hope” for the second, allowing the subtitle and the cover design to supply more information as to what each of the books is about. I might even change the name of the heroine of the second from Katie to Hope to match the title. What do you think?